Sixty-two years after the uprising against Chinese power (10th March 1959) and the subsequent massacre, commemorated today, the Roof of the World is slowly dying, in a growing international indifference.  Dependency towards China, the hyper-exporter, is obligatory and impunity of Communist totalitarianism persists….

Every year the Tibetan government in exile commemorates the « Day of Tibetan Uprising”, that occurred on 10th March 1959, when the Tibetan separatists rebelled against the power of Mao Tsé Doung. The Chinese Communist parties of Mao, who rose to power in 1949, stated in their rather stilted Marxian language that their people “demand freedom from the imperialist forces” and from the “feudal reactionary regime of Lhassa”.   In October 1950, the People’s Liberation Army invaded the country.  The conflict ended with the massacre of 87,000 Tibetans followed by the exile (between 1959 and 1960) of 80,000 others who went to India to reach the Dalai Lama refugee. At just 15 years of age, he had narrowly escaped from the Maoists and reached India on foot (via the Himalayas) with the alleged aid of the CIA. In less than one decade, Tibet was entirely under Sino-Communist control. It was destroyed even more between 1966 and 1976 by the “Cultural revolution” (20 million deaths in China), affecting Tibet more than the rest of China. In total, 20% of the Tibetan population (1.2 million) perished under the Sino-Maoist tyranny.  More than 99% of the 6,000 monasteries, temples and religious sanctuaries of Tibet were plundered or decimated. Tibet is currently a military occupied and economically colonized country.  Its mining resources are over-exploited. In fifty years, the Tibetan language, that has become a minority language, is condemned to an inevitable decline due to forced Sinicisation. Meanwhile, millions of Hans, the Chinese majority ethnic group, have been sent to live in Tibet, Peking considering the topic of Tibet closed by inundating it demographically. 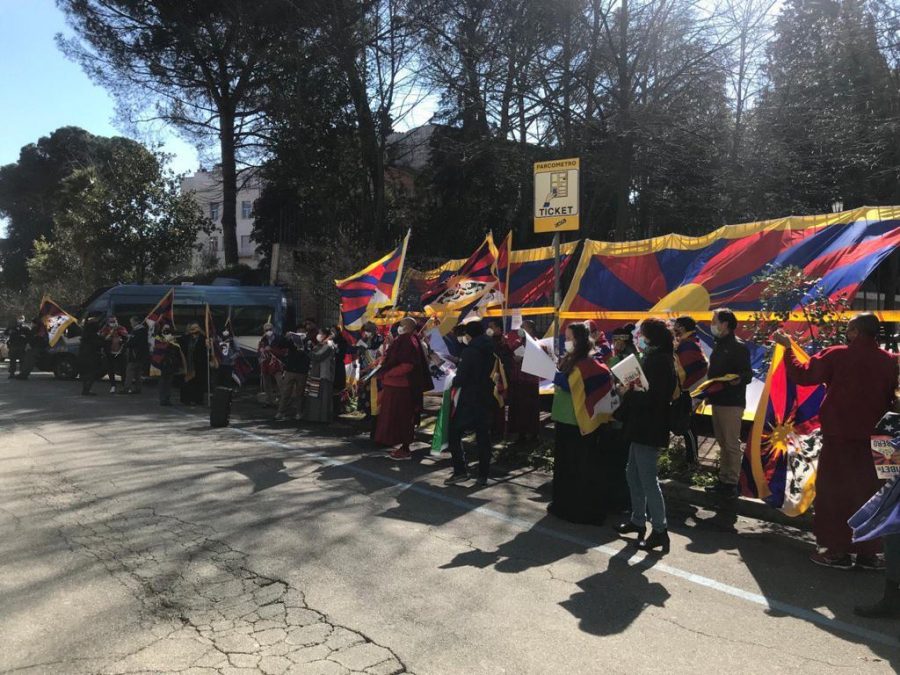 Two weights and two measures in international indignation : the drama of the Tibetan Buddhists,  less buoyant than that of the Uyghur Muslims…

After several years, the 14th Tibetan Dalai Lama denounces the “cultural genocide” of Tibet but this topic, contrarily to that of the Uyghur Muslims of Xinjang, did not mobilize the United Nations or Western Chancelleries.  As far as Xi Jinping is concerned, the most ferocious Chinese Communist dictator since Mao, elsewhere nominated as life President and who registered his doctrine in the  constitutional framework equal to that of Mao, Tibet has been part of China for “thousands of years”, and every critic of Chinese politics in this “province” is reported as an “interference”. In reality, since his arrival as the head of State in 2012, the situation gradually deteriorated for the Tibetans in general indifference:  restrictions in terms of religious freedom; the detention of opponents/peaceful protestors; torture; forced  labour-camps (Laogaï), obligatory “professional training” programmes depriving hundreds of thousands of Tibetans of their land etc.  As a reminder, the majority of immolations of monks and nuns to protest against the violence of the regime took place at the beginning of the mandate of Xi: 86 in 2012 out of the 155 identified since 2009.

It is true that the UN has more interest in reporting « Islamophobia» than « Buddhism phobia » or « Tibet phobia » : China is the second largest contributor towards the UN budget following the United States and Islam is defended by 57 Muslim countries that are members of the OIC, the Organisation of Islamic Cooperation, of which the very rich oil monarchies. Tibetan Buddhism is not backed by these kinds of powers…. Curiously enough, the Western countries, who give moral lessons to the world and economically punish Moscow, are followers of the ‘realpolitik’ regarding Peking with whom they signed free trade agreements….

Tibet, the worst place in the world for civil rights is on par with North Korea…

In its last report published at the end of February 2021 on the state of freedom in the world, (“La démocratie sous le siège”), the American organisation Freedom House classifies Tibet as « the worst place in the world for civil rights and political freedom ». In reality, the social control system of the Chinese Communist government has been tested and also « perfected » in the « pilot » region of Tibet.  This high technology method of surveillance worthy of the book by Orwell (1984), makes it more difficult for a foreign journalist to go to Lhassa than Pyongyang..   It is true to say that the neo-Maoist China and « total capitalist » (Baverez) of Xi Jinping, modulates the opening of freedom according to its regions : Tibet is one of the most reclusive and suppressed areas, compared with the prosperous zones of the East and South, where exports that makes the entire world dependent of Peking are made. This dependence, that has become pathetic since the health crisis, explains the silence of our governments on the repression of the Tibetans and strengthening of the Chinese techno-totalitarianism.  The Western politically correct leaders have never, in fact, reported the Communist dictatorship as reported by the « populists » or the Russia of Putin : who dares to remember that out of the total of 100 million victims of Communism, the Maoist China, that rehabilitates the president XI, it killed between 50 and 72 million (see  “Livre noir du communisme”)?  And those who deplore (kindly) the Islamophobia of Peking regarding the institutionalisation of the Uighur rebels of Xinjang are much more discreet on repressions, forced Sinicisation and the re-education of the Tibetans in the same fields. They can no longer be heard reporting Buddhism phobia of the neo-Maoist regime. 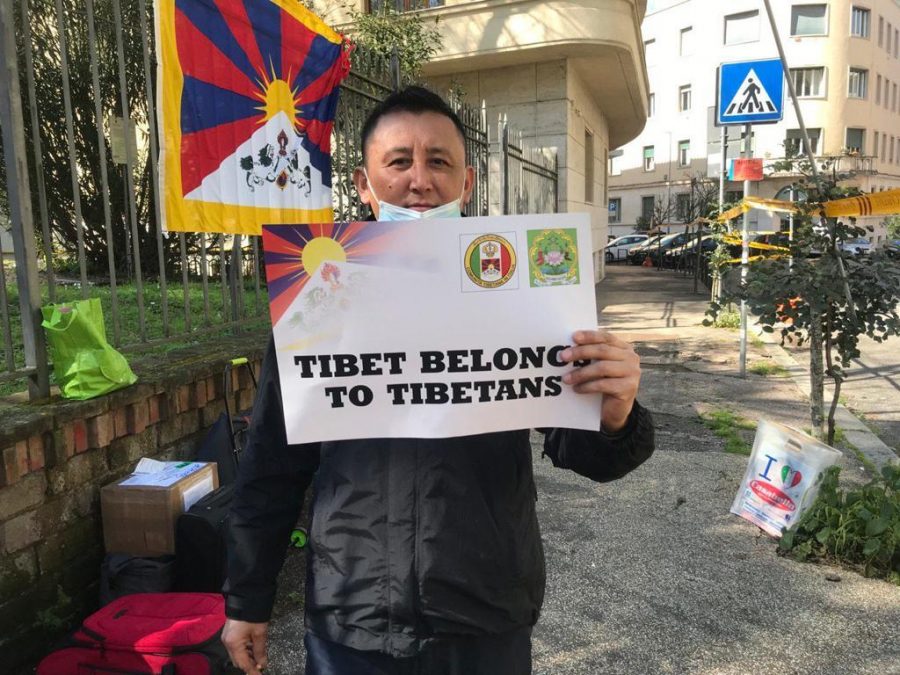 Lessons on moral by Western intellectuals (often «Islamo-leftists », moreover), by the politically correct managers of the EU or by GAFAMS, who recently banned Trump, are much fiercer towards Bolsonaro, Putin than against the China of Xi Jinping. In the light of observation of the Chinese super power, our technological-economic and sanitary dependence towards « the factory of the Chinese world » (in the process of degrading the West in all fields, including energy transition, quantum computers or the medicine of tomorrow) should worry our leaders more than Putin’s Russia, whose GDP (1,700 billion Dollars) is ridiculous compared with that of China (35,000 billion). And the Orwell process of total social control anticipated by George Orwell is an everyday reality in China, in the real world and also in the virtual world. The giants of the Chinese hi-tech web (Tencent, Alibaba, JD.com, Baidu, the equivalent of the American GAFAMS: Google, Amazon, Facebook, Apple, Microsoft, Twitter), work together  with the Community party and the intelligence services of Peking with the objective of increasing the Sino-Maoist hegemony. Management, through Peking, of information technology as well as its near-monopoly of exploitation of rare earth (metals to make batteries, planes and computers work), without forgetting the extreme rapidity with which China increases its military power, providing Communism dear to Xi a frightening amount of power. But besides our hyper-dependence on Chinese products and the logic of the balance of power, the complacency of our élite towards the Marxist ideology, never condemned as Nazism, allows Peking to carry on destroying Tibet and fighting the free world.